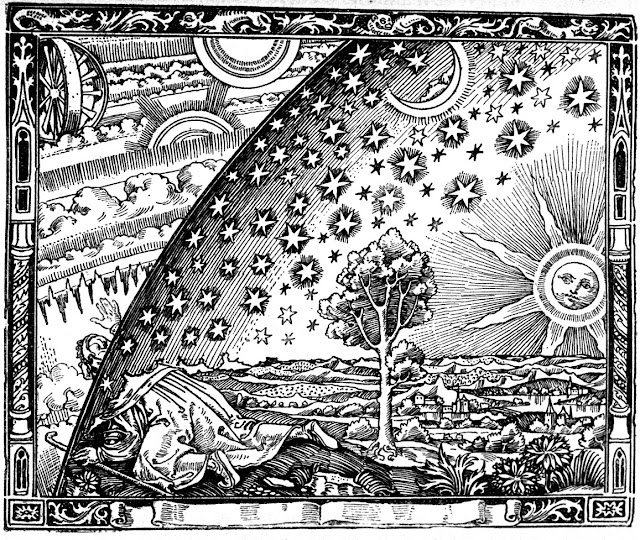 For a long time, this was believed to be an anonymous engraving from the sixteenth century. In fact, however, this wood engraving was made by Camille Flammarion and originally appeared in his 1888 book 'L’atmosphère: météorologie populaire' (The Atmosphere: Popular Meteorology).
It illustrates a Byzantine legend in which three monks go in search of an earthly paradise where Heaven and Earth meet and eventually find Saint Macarius Romanus kneeling in a lovely landscape by the gates of Paradise. (Source NRC)
The legend of Macarius’ search for the source of immortality was previously told in 323 B.C., in a Jewish version in which he wants to conquer Paradise. The text by astronomer Flammarion contains lyrical descriptions highlighting the beauty of the Earth with its misty mountains, specular lakes, magnificent sunrises and sunsets, overarched by a beautiful blue sky ‘that shows the infinity in your depths: your existence and beauty are only due to this light yet powerful fluid that extends across the globe. Without it, none of these views and none of these many subtle shades of colour would exist.' (Source Skepsis: http://skepsis.nl/flammarion/)

This print of the Sky Viewer has hung on my studio wall for many years.
The figure’s body is caught between day and night. The Earth is covered with flowers and a tree, in the distance we see villages making way for a mountainous landscape or an endless, undulating sea. From the darkness of night, with its twinkling stars, Macarius sticks his head through the atmosphere and there encounters the real magic, that only he can see. It’s an illuminated universe without beginning or end, planets, clouds, new suns and a wheel that represents the timelessness of eternity.
Behind the visible reality, we see an endless landscape of meteorological phenomena, ice shoals, rain, cloud formations, sunset and moonrise, and the double wheel that is driven by the four winds and simultaneously turns around its own axis.

All elements and dimensions come together, time seems to stand still, just like every work of art is a moment frozen in time.
From every angle or point of view, the horizon in the far distance where Heaven and Earth meet will always remain distant. In an empty and flat landscape, the horizon extends towards all directions in a circle, of which you, turning around your own axis, are the center and first dimension. Just like in the double wheel, the second dimension is the rotating Earth with the central axis.
The third dimension is the universe, with its countless galaxies and universes, dying planets, new stars; a swirling, circular, exploding and constant motion with black holes that absorb matter and make it disappear into unknown areas. Due to time limitations I shall omit a consideration of the factor time.
To my eyes, this picture represents boundlessness and infinity, the mystery of the horizon. 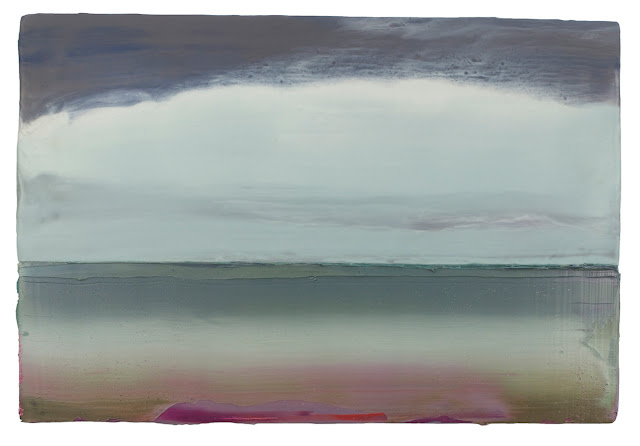 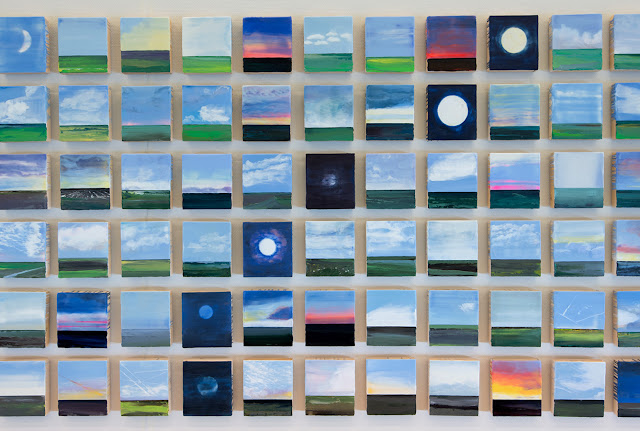 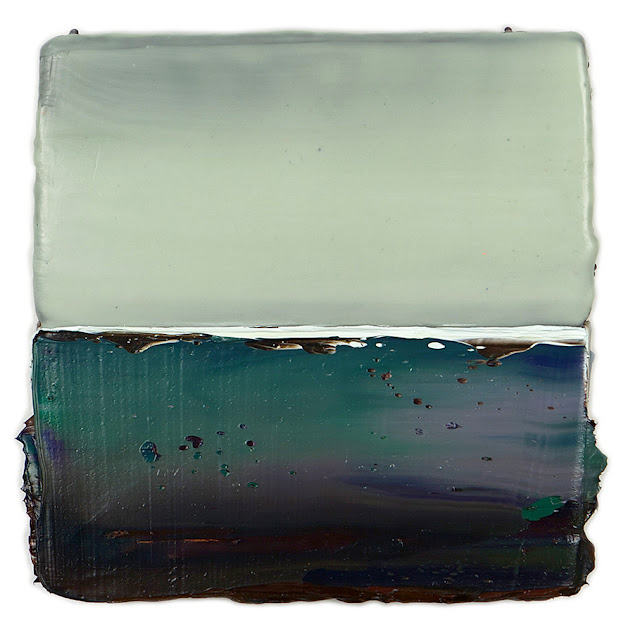 I quit making fine art in 1965 when the governor of Nebraska threatened me with prosecution for what he deemed my 'pornographic' paintings. I didn't start again until 2001. But during that interval, I was always drawing, always looking. And one of the things that most caught my eye was an advertisement for a show of pygmy drawings, at Linda Einfeld in Chicago,1980.

I tried to buy a piece, but was told I was too late. No pieces left.

Still, the 17 pieces shown in the catalog changed my drawing style. At night, I would spend hours studying the reproductions, then retire and dream about them. I wanted to make lines like the Mbuti.

Later, in the 90's, lavish books were published, providing more examples, and my affection and admiration for the work of the Mbuti increased. Dots and dashes, cross-hatches and zigzags; map-like; edging close to meaning but never arriving (at least, not within my comprehension): to me they seemed the height of elegance. Today, 35 years later, they still do. 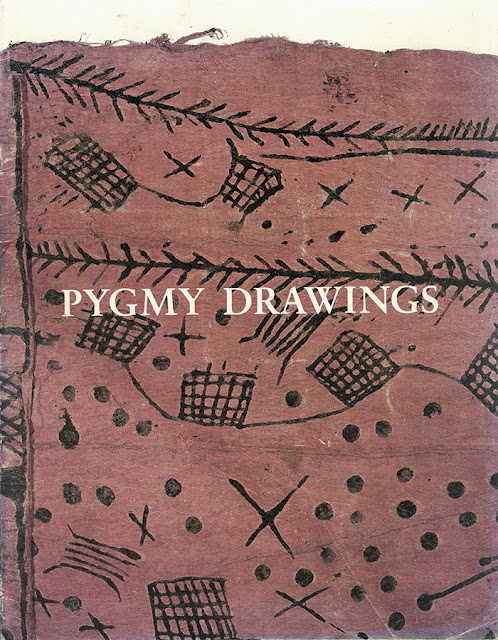 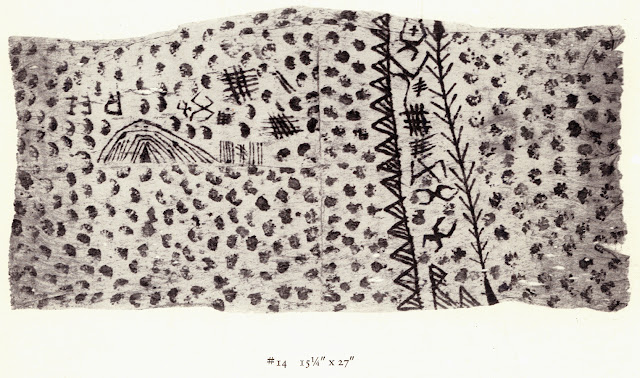 Illustration from Pygmy Drawings
(7th page, although the pages are unnumbered)
15 1/4 x 27 inch (38,7 x 68,6 cm)
(the measurements are printed along with the illustration) 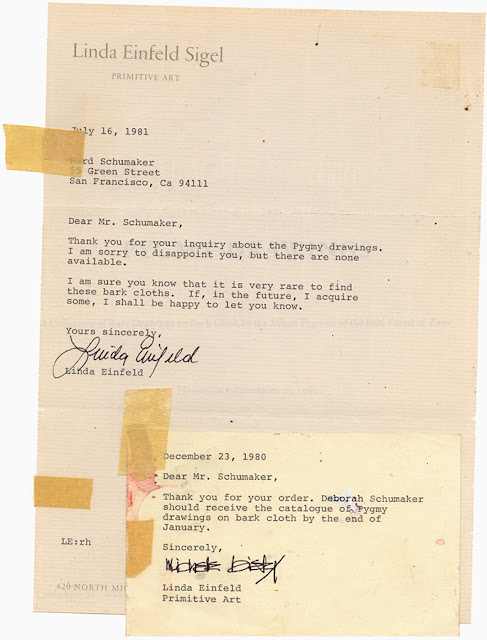 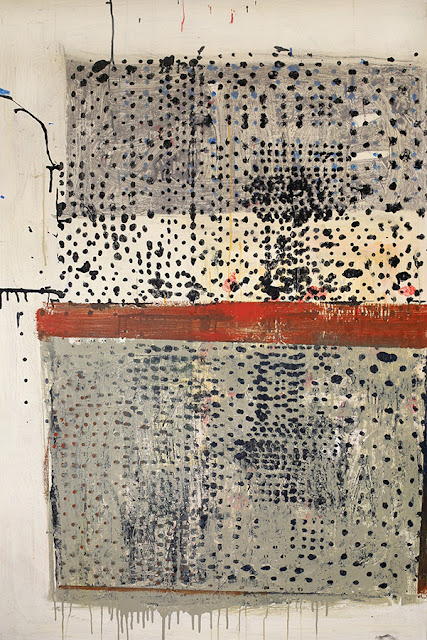