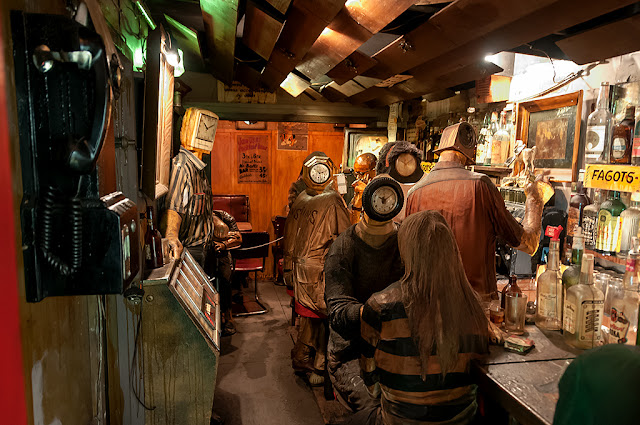 One of the first works of art that I remember having made a huge impression on me was ‘The Beanery’, an installation of Edward Kienholz that forms part of the collection of the Stedelijk Museum in Amsterdam for as long as I can remember. It is a near life-size (in fact it measures a slightly alienating and claustrophobic ⅔ of the original size), walk-in artwork which Kienholz created in 1965, representing the interior of a Los Angeles bar, called Barney’s Beanery. As soon as you enter the work it surrounds you completely; it features the smells and sounds of the bar, and models of customers, all of whom have clocks for faces with the time set at 10:10. Only the model of Barney, the owner, has a real face. Kienholz is quoted as saying "The entire work symbolizes the switch from real time (symbolized by a newspaper) to the surrealist time inside the bar, where people waste time, kill time, forget time, and ignore time".

Some years before I went to art school I got deeply interested in surrealist art and correlative techniques of creation such as montage, collage and assemblage. To me the work of Kienholz seemed a brilliant example of the field that fascinated me; it combined a strong expressive power with a inescapable subject-matter (that of ‘the human condition’ but of social criticism as well), a combination that proved irresistible for a searching and desperate teenager like I was. In art school, subsequently, we were learned to despise works of art with too much subject-matter and drama (which all had the name of being ‘anecdotic’, which was definitely a swearing), and like the other students I forgot for most part about surrealism, and forgot about Kienholz altogether.

Only recently, after I had finished the preparations for my exhibition ‘My Life in the Bush of Ghosts’ (in Foam museum for photography, Amsterdam), I realized that my recent work had a lot in common with the works of Kienholz that must long have been slumbering somewhere in the back of my mind, but nevertheless proved to have had its influence on the things I recently had created. Earlier in my career I had experimented a lot with combining photographs, with using ‘found footage’ in my work and even with the use of collage techniques to write an entire novel. It wasn’t earlier than this stage, however, that I found myself starting to work with real objects, not in a photographed version but applying them as dimensional parts in my works. It was not until now that the inspiring approach of Kienholz came to my conscious memory again – his choice for objects from flea markets and thrift stores, objects that not only had a use and a meaning, but also possessed a life, although most of it lying behind them. Only now I realized that he must have been one of my inspiring masters all the time.

Of course there’s still a lot to argue about the art of Edward Kienholz, but for now I will refrain from that – nothing but good should be said about the dead! 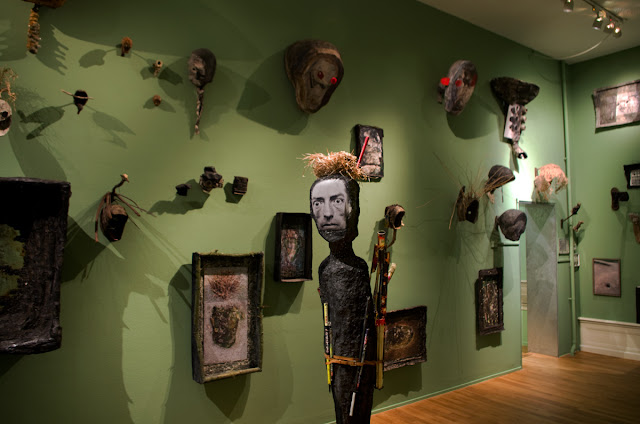 Paul Bogaers (NL)
My Life in the Bush of Ghosts
exhibition in Foam museum for photography, Amsterdam
installation view
2015
paulbogaers.com 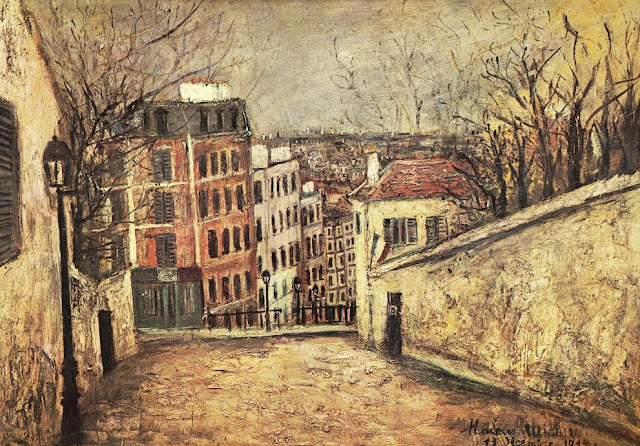 Much has been written about Maurice Utrillo, though as with Vincent van Gogh, the facts of his life have become difficult to distinguish from the myths that have sprung up around them. As such, it is not my intention to revisit this life, and for another reason also: knowledge of Utrillo’s life fails to account for what it is that makes his paintings what they are.

It is certainly a mistake to try to position Utrillo as social commentator, a responsibility bestowed retrospectively upon L. S. Lowry, to point out, for those requiring it, that it was indeed grim up north, or for John Bratby, for declaring that it could be grim down south too. The poorer areas of Paris in the first decades of the twentieth century were certainly places of inequality, sparseness and transition, captured memorably by Eugène Atget’s camera. Yet Utrillo’s paintings stand as testaments to something else.

I’ve chosen the French painter of Montmartre for the simple reason that I consider him to have been, between about 1909 and 1914, years referred to later as his manière blanche (white period), the most outstanding exponent of a rarefied form of landscape painting, examples of which can be found in the oeuvres of few artists before or since.

This form of painting, if it can be deemed such, has no name. Nor does it possess distinctive and unifying motifs or subject matter with which to comfortably separate it from approaches pursued by other painters within the landscape genre. For this and other reasons, the paintings of Utrillo are unique, standing as a body of works wherein no single painting exceeds another, risks the integrity of the grouping, or threatens the constitution of his world.

This is not to suggest that there is incompleteness in respect of individual paintings, merely that almost all of Utrillo’s works from this period are indicative of similar concerns, attesting to shared truths and demarcating interrelated ground. It is difficult to pick out a highlight from what amounts to many dozen canvases and boards, in so far as each instance of painting offers more of the same.

This sameness, however, is richly variegated, and of such distinction, subtlety and grace that his contemporaries, including many of the great moderns, admired its quality whilst being at a loss to fully explain it. For a period of less than six years Utrillo attained a remarkable level of consistency – more consistent in fact than during the latter part of his protected (by his mother, Suzanne Valadon, then wife, Lucie Valore) and protracted period of artistic decline, from the 1920s until his death at the age of 71 in 1955.

Utrillo’s gift comprised a fragile balance of interrelated elements, kept tightly in check. The relationship of drawing to painting is central in understanding his achievement. When later this bond began to weaken, and eventually dissolved, its significance became much clearer. The structure is always purposeful, serving to establish complex spatial relationships, redirecting the eye between and beyond buildings, preventing the viewer from getting close enough to anything to dispel the sense of longing. The shuttered windows face outwards.

Yet it is Utrillo’s sensitivity to the subtlest gradations of tone (the seeing of tonal variation in colour) alongside an ability to process, replicate and distil the physicality of these sensations through a virtuoso handling of oil paint that lifts these works above all comparable examples of urban landscape painting. Never in painting has a sense of aloneness, of simple goings-on, of leaden skies and light falling on cracking, peeling, piss-stained walls been so beautiful. 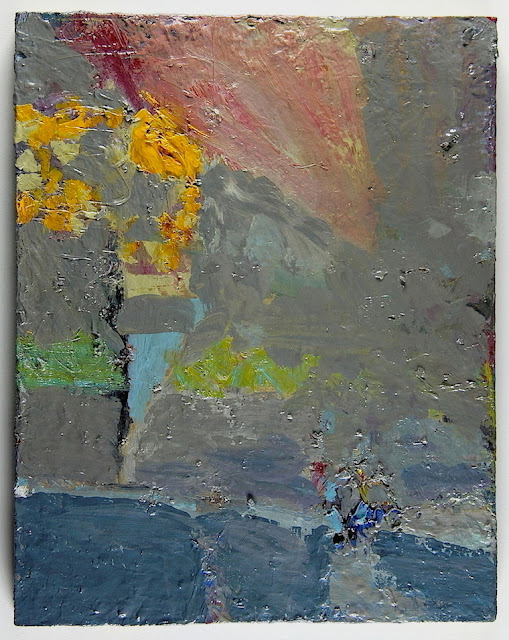 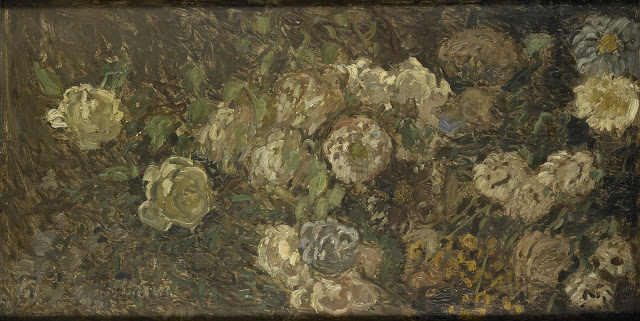 Since I paint I always had an affinity with impressionism. Like this work of Monet, with flowers. This, to me, is a strong abstractive painting. The intensity, the fullness, the darkness and the gestural create a very beautiful unity. The connections, the oneness in this painting make this an extremely fascinating whole.
Nico Vaerewijck, 2015 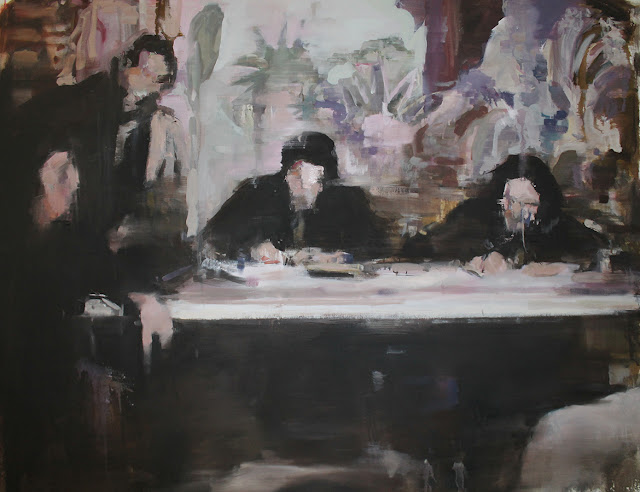