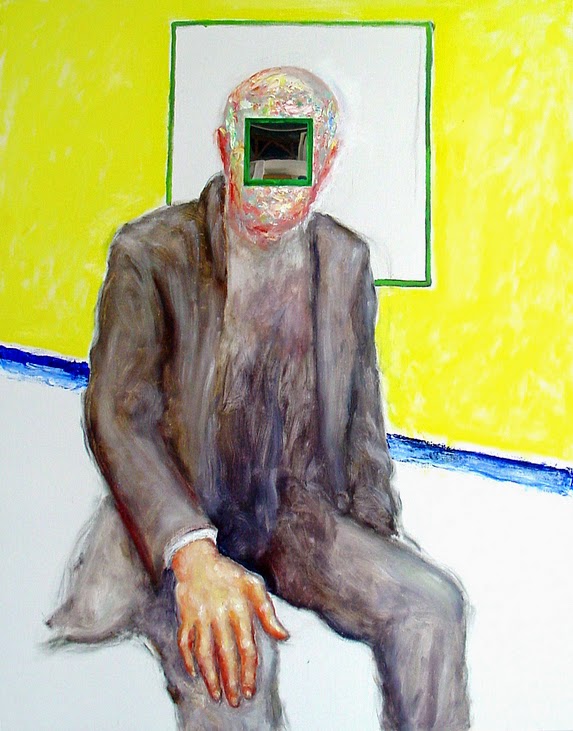 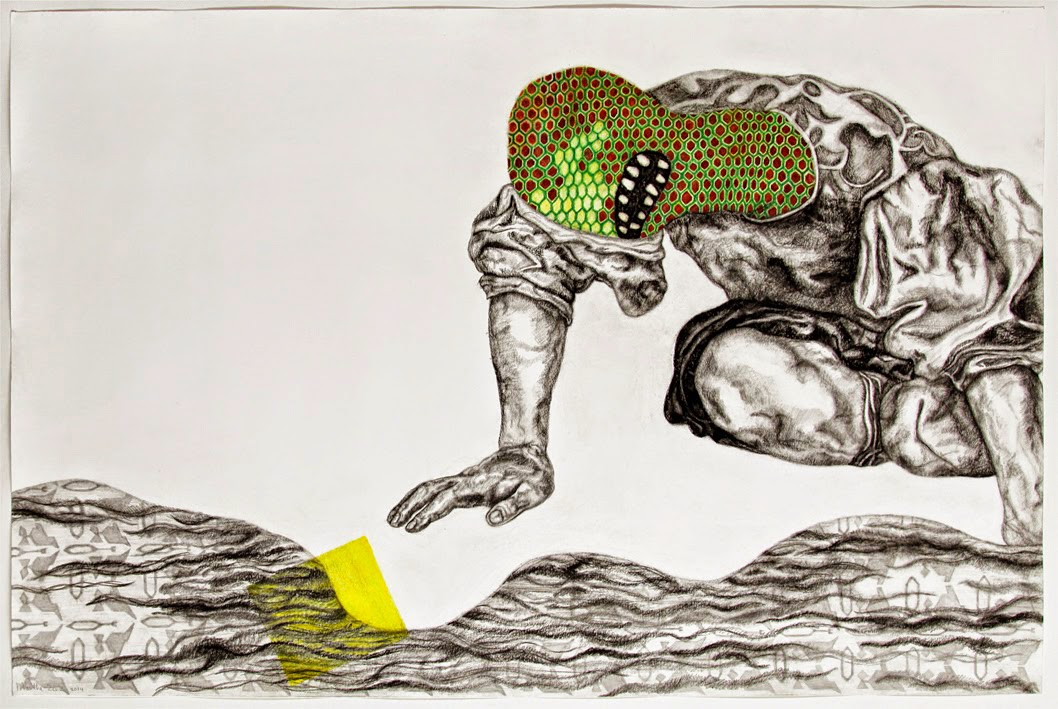 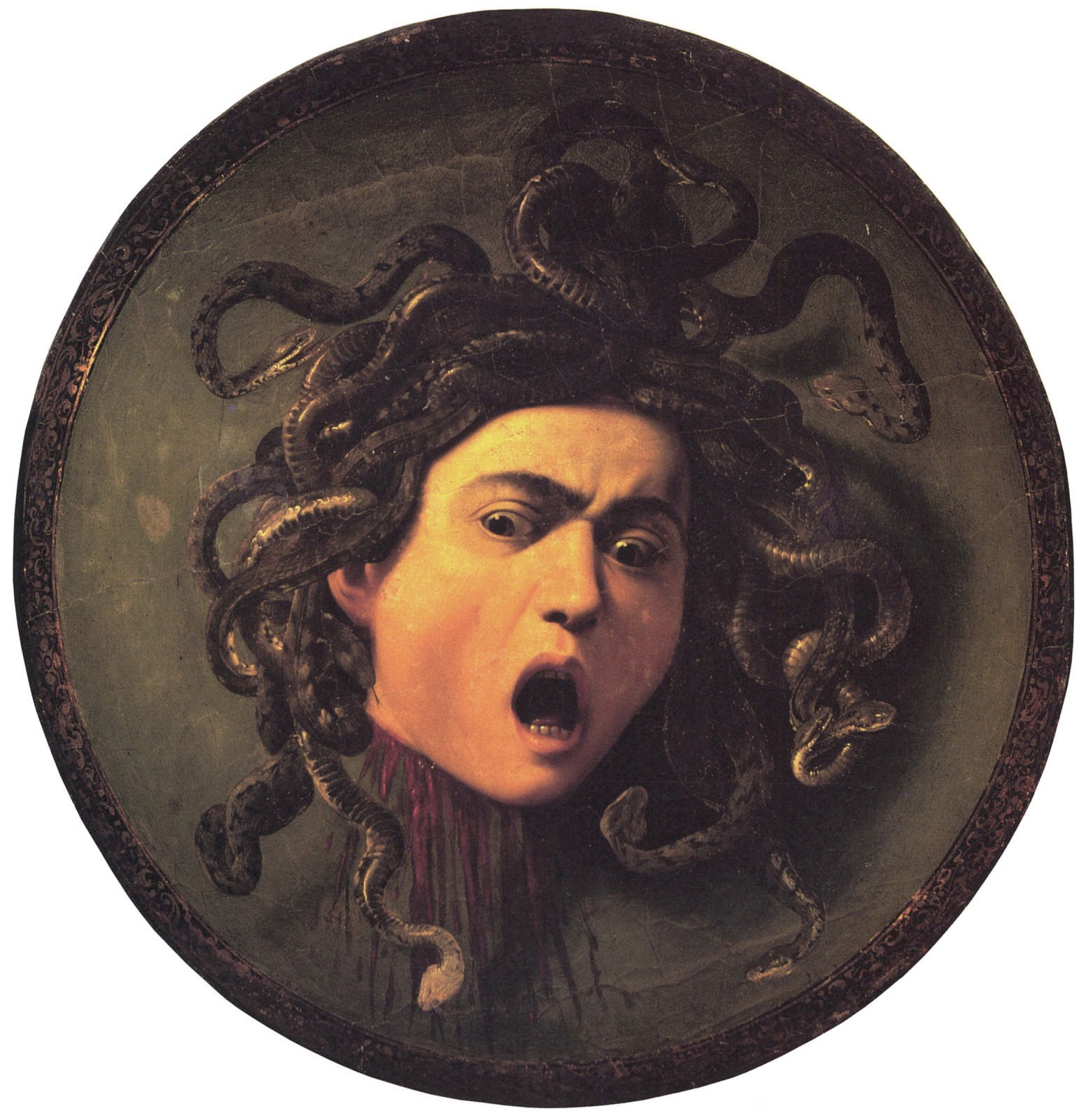 My version of Medusa is a painting on a light box with big holes. It is a portrait of Noami Watts as the jellyfish (funny translation of Medusa of course) of Caravaggio. The portrait is extracted from the King Kong movie by Peter Jackson, just when Naomi is sandwiched between a tyrannosaur and King Kong. But if you look closely you only see the many spots of the Hollywood studio lights in her eyes. I added neon lamps behind the painting to create wedged stupefaction between two technical moments, and the holes are connectors.
Marcel Berlanger, 2014 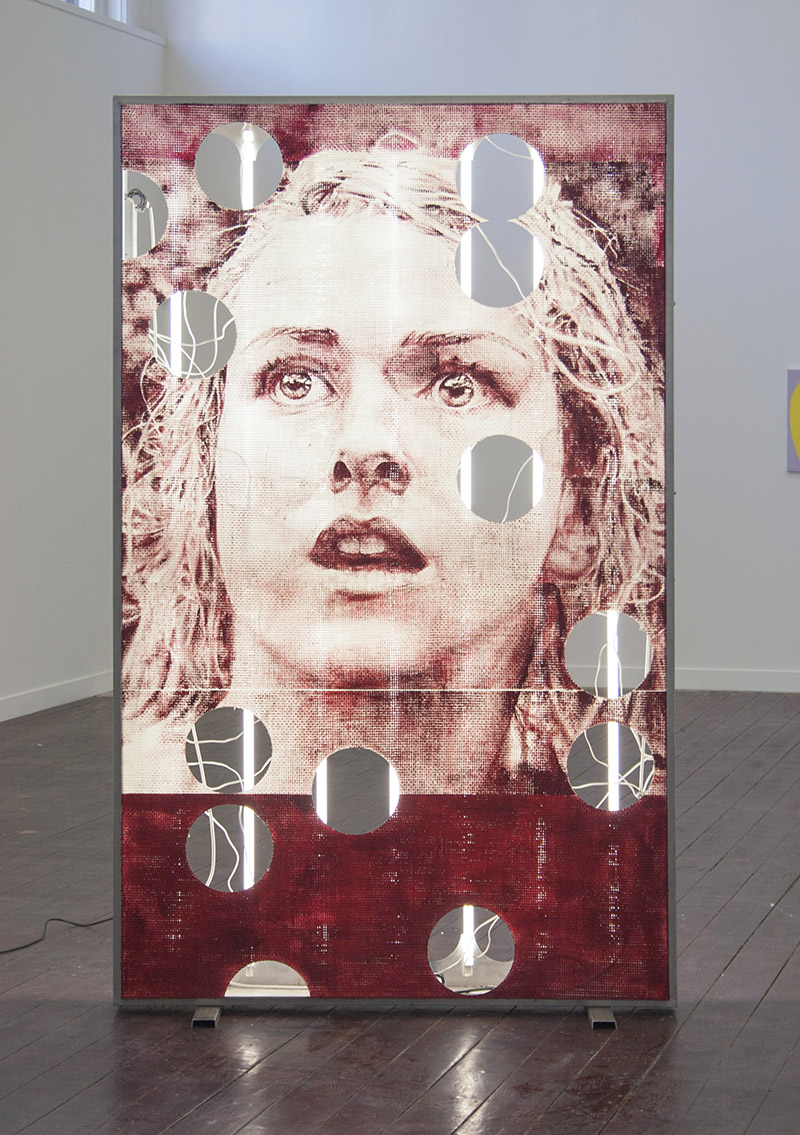 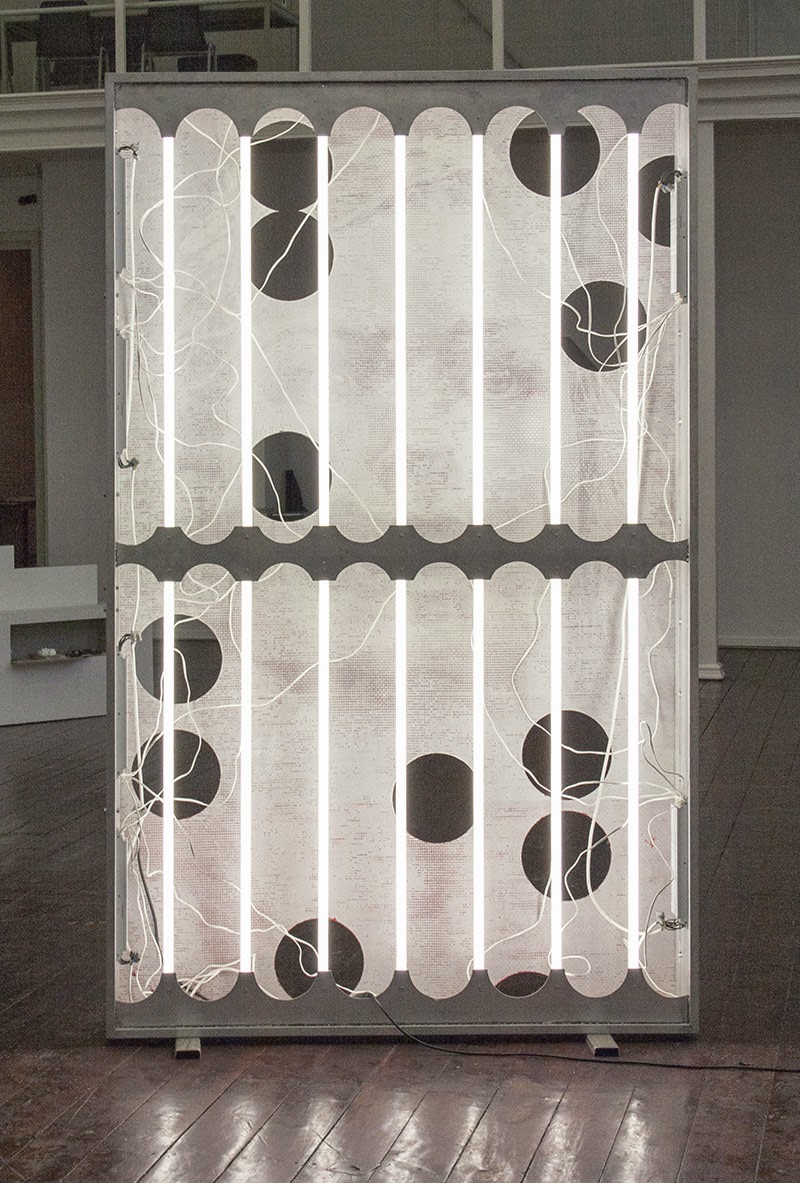 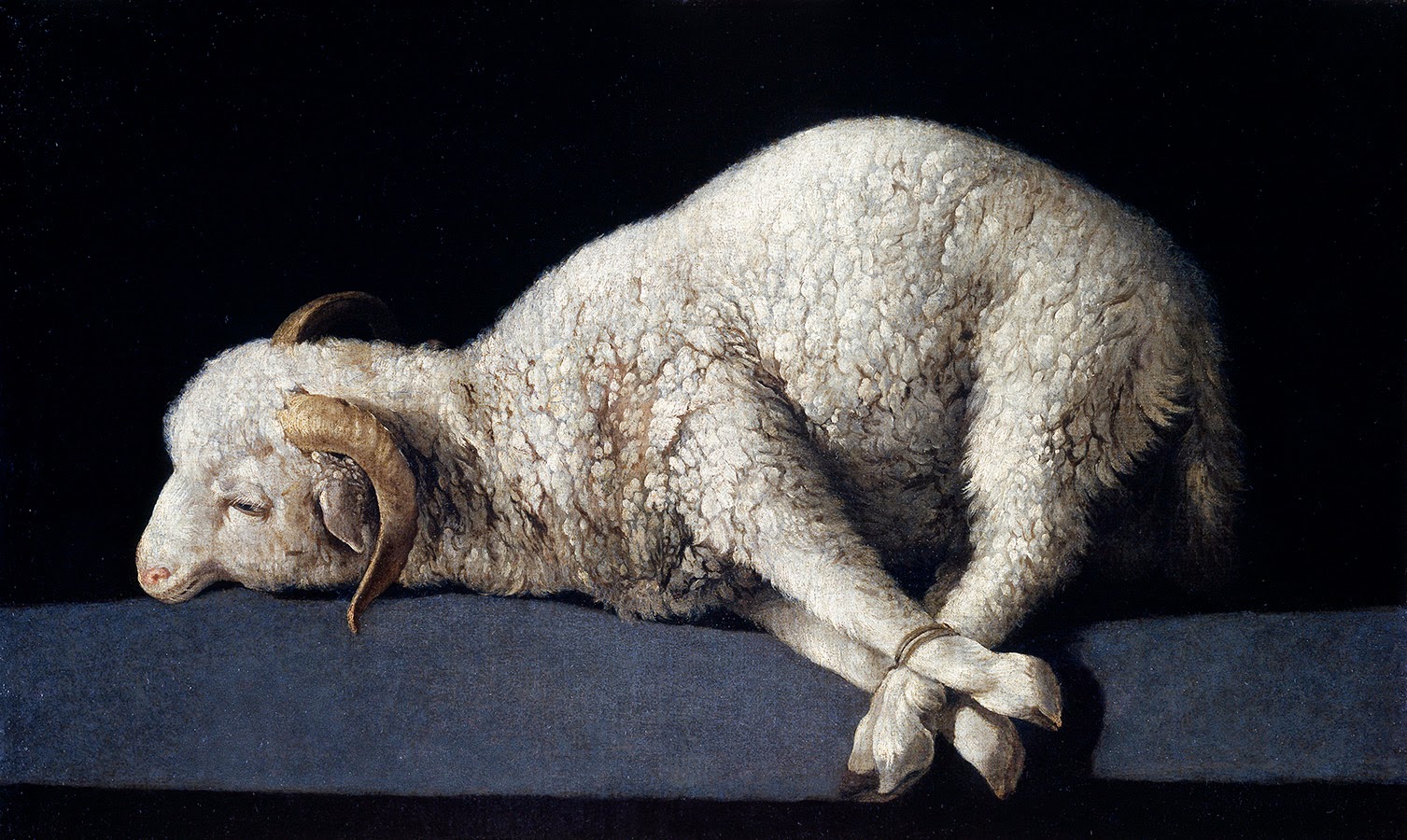 In Zurbaran’s art all is silent. His sober brown/black/white paintings do not distract with colour, narrative or lavish form. He paints metre-high portraits of pale monks, wrapped in coarsely woven, brown robes. They look at you seriously and questioningly: who are you, what are you doing and where were you? They are encounters.
The Agnus Dei of 1635-1640 is my favourite. It hangs in the main room of the Prado Museum, Madrid, in the company of the enormous paintings by, among others, Velazquez and El Greco. A lamb lies on its side, its head stretched out, its four feet tied together. It does not struggle; it lies still and awaits its fate. Who are you, what are you doing, where were you? You do not have to be a believer nor an Einstein to discover the analogy with Jesus Christ, but through Zurbaran’s understatement you get the idea that you have thought it up yourself.
I thought of Spain, the time I went walking with my dog. I thought of how my trusty, gentle hound, on coming across a flock of sheep, turned within seconds into a raging killer. I realized that nothing I could do would keep him from going after those roaming clouds, the fluffy beasts. Sheep do not defend themselves. It does not occur to them to join together to protect their lambs. All they do is flee, let themselves be driven into the barbed wire. They surrender with no resistance. Barely a half hour later the dog returned, panting and happily wagging his tail, while behind him, spread out in the meadow, lay three dead lambs. Why? Because he was able do it. Unsatisfying, but for the question of why atrocities take place this is probably the most definitive answer.
Caren van Herwaarden, 2015 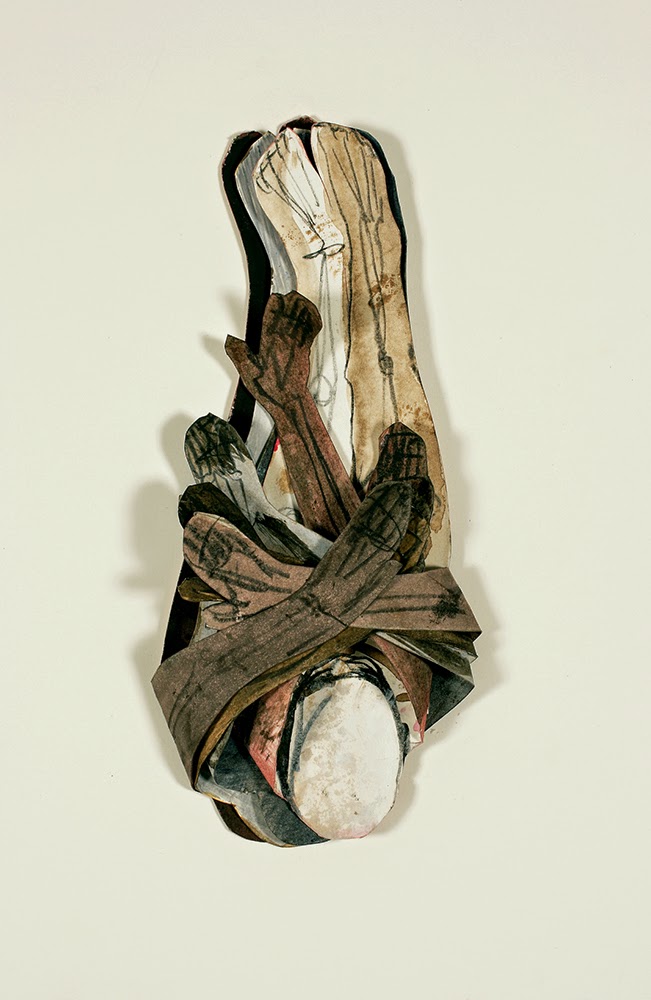