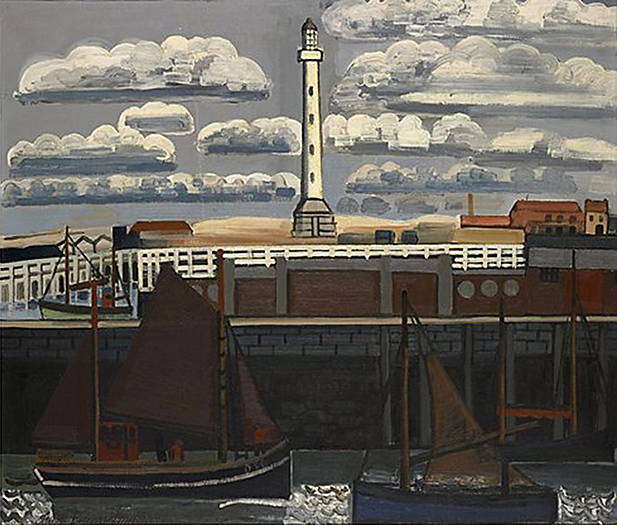 The work of Jean Brusselmans has a disarming simplicity and naive force that always hits me. His paint regions are resolutely and stripped of frills. There speakes innocence, vulnerability and a great sincerity.
Jean Brusselmans took the ordinariness of people and things around him as his subject. They where a means of achieving an essence of the form reduced to geometric patterns.
A critic once called him an expressionist, what he loathed, for his painting was not a search for emotion; his painting was a search for a way of thinking, he said himself because a paint zone had to remain a paint zone and a line a line.
He built a structure in which each form got its completely natural and convincing place. He said himself: "The composition is essential. It creates the order, gives each character and object a place and arranges the lines of the painting, straight horizontal or oblique. It devides shadow and light and gives each object a character, expression and life of its own"
The rhythm in many of his works is like the rhythm of a peace of music.
Visible is his admiration for folk art. Brusselman says: "Folk art has -in addition to van Gogh, Courbet, van Eyck and the Greek- learned me the most after all."
Gabriëlle van de Laak, 2015 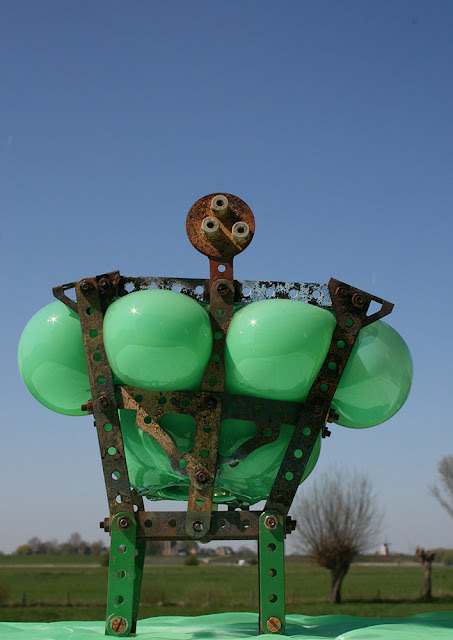 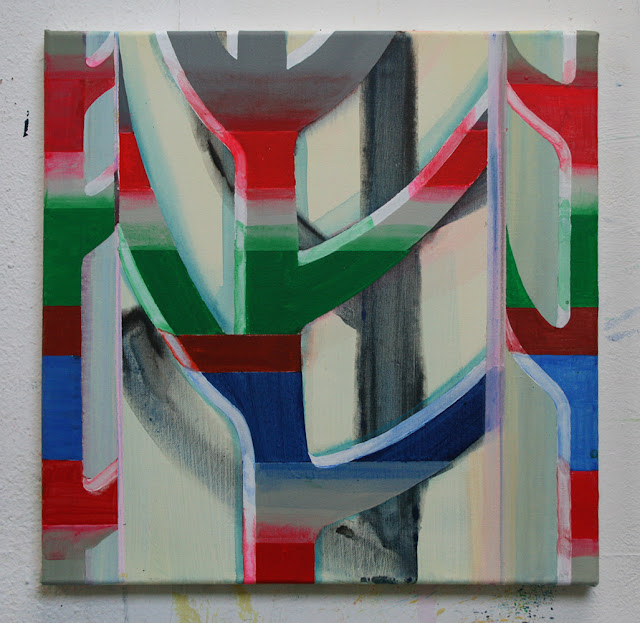 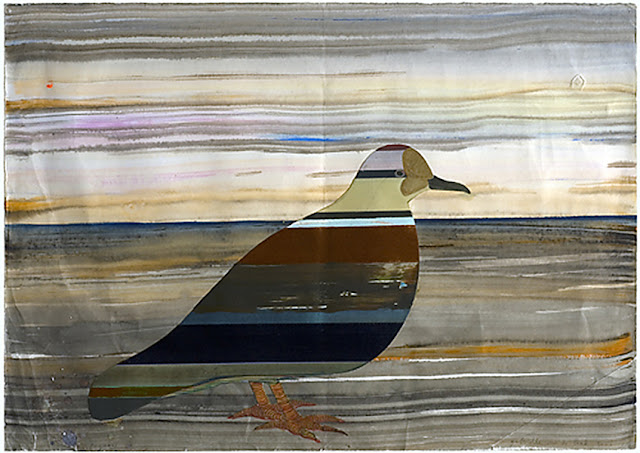 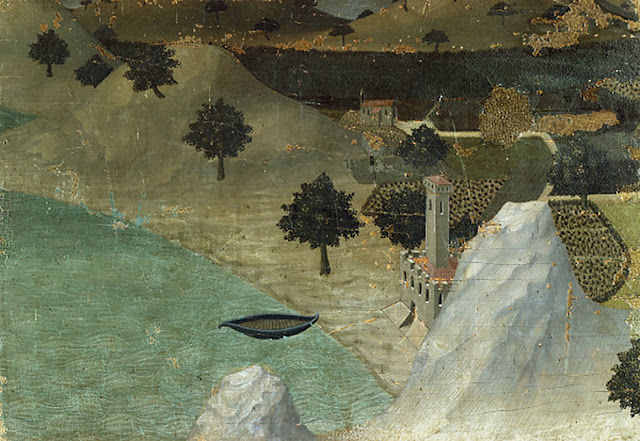 A long time ago I saw a small painting by Ambrogio Lorenzetti in the National Pinacoteca in Siena. The work titled 'Castello in Riva a un lago' [circa 1348] overwhelmed me, it seemed motionless with a suspicion of an action. A boat in a lake near a castle, cultivated fields and houses. Everything points to the presence of humans, we just do not see them. The work drew me in its flat space, an accumulation of mountainous forms, water and trees.

I stayed a long time looking at the work, a guard gave me a chair so I was at ease. It was quiet in the museum, it was a beautiful day and the people sat on terraces. I bought a postcard of the painting, which is now hanging in my studio for 25 years. For me this painting is a symbol of how a work of art can stimulate your imagination, can achieve a silence in your mind, a silence that can turn into a soft humming, or perhaps an exuberant singing. 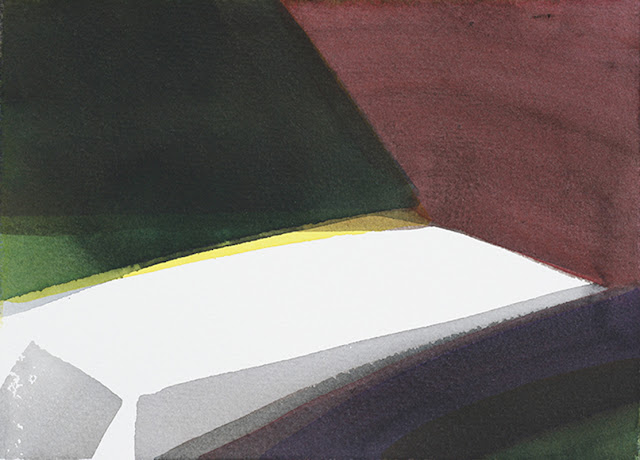 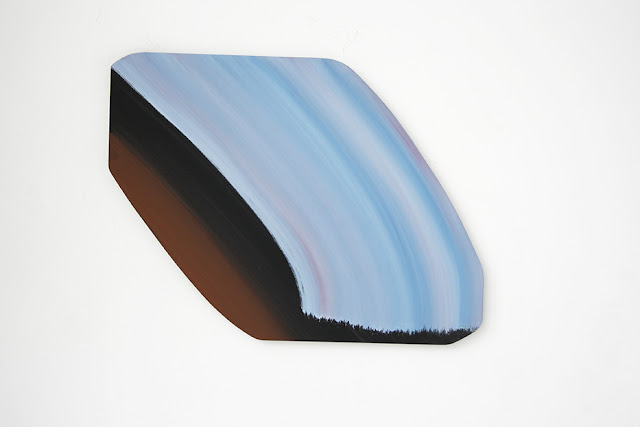 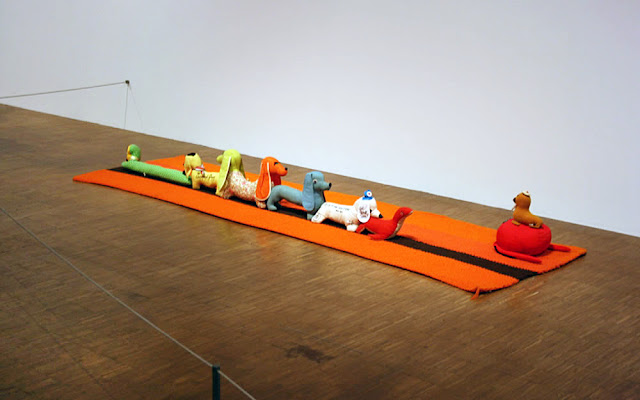 Ellsworth Kelly was the painter who made me come home in the visual arts. The clarity, the great smoothness, the sophistication and at the same time the gesture of leaving the frame, on its way of becoming an object, that, in its bright colors, captured the wall opposite me and myself.

Mike Kelley brought me back to these small obscene discoveries of body, and the dirty loud laughter of my adolescence mind, to those discoveries and confusions that seemed so exciting personal, because they seemed to be only mine. That I was a thing too, a thing to touch and lick, that gave me a bright glance, that made me generous, vile, strange and familiar at the same time. As if I swelled and widened, and made me no longer smuggle away anything inappropriate, but instead intensified  the places, the moments, the memory, the connection with everything around me just as it happened.
It was no longer only bright, sensual, sensible and responsible, but as well nagging, hard yellow or brilliant brown, dirty, uncomfortable, horny and lusty. A closed in world where I could blur. Where I could bump and fiddle with humming shapes and frizzy pawings. Where I grabbed myself and could become a wild laughing root or whatever.

You can now aim to describe that precise and clear, but it will always, in many ways, be unrelated to back then. Perhaps the attempt to write about it, is a sin towards life and being submerged into here and now. The thought of it can be joyful because the control is pleasant, but by then a vile experience was a sparkle, dominant and rather undefined, a pom pom pom, not a word, not a sentence, just a tra la tra la.
I do not know what existence wants. Desire or Consciousness?

That split drudges in my work. Beautiful..yes, clear..yes, color..yes, large convex forms..yes as well. Uncluttered..probably, almost lucid..perhaps. But voluntarily, it is secretly in the ground already broken. Cheap sheets of paper size A4 that rather quickly discolor in daylight; the work is composed of small angular building blocks (A4 paper) as if the big picture can not be true. Partially torn sheets, holes appear and membranes arise, they are shredded, evaporate as flakes of foam on the surface. Newspaper clippings of global suffering deform to a jumble. Words that remain independent, sometimes trigger multiple meanings by color/form context or just giggle a bit. But at the end words don't want to be horny and indefinable but they want to operate in terms of meaning, explaining and naming.
I can hardly give them back the adolescence mind.
Yeah, yeah, I fail in my art, and at times in my daily life.
Momentarily not, but most of the time I mumble away and wait dying from here. 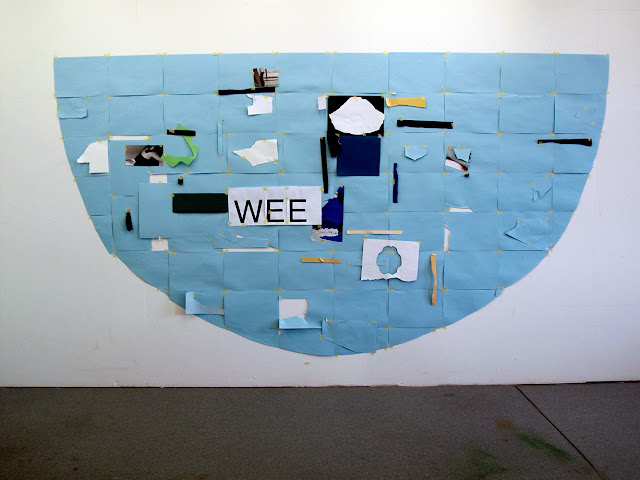 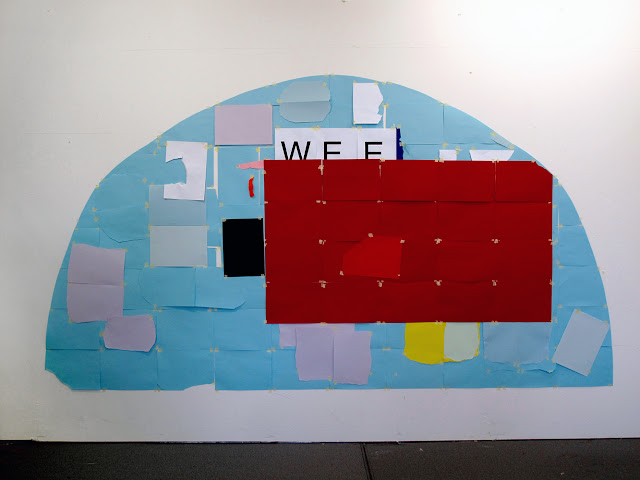 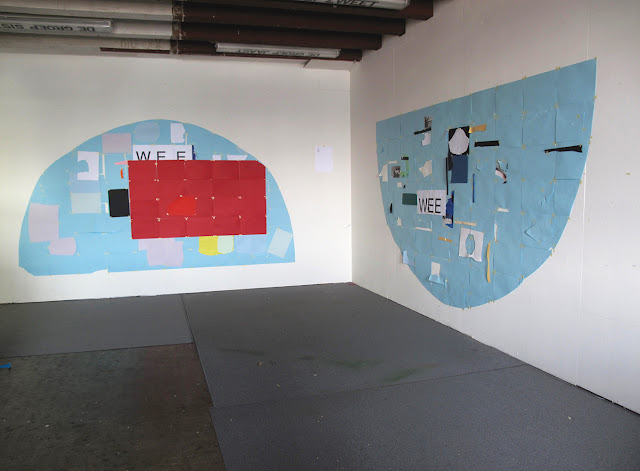