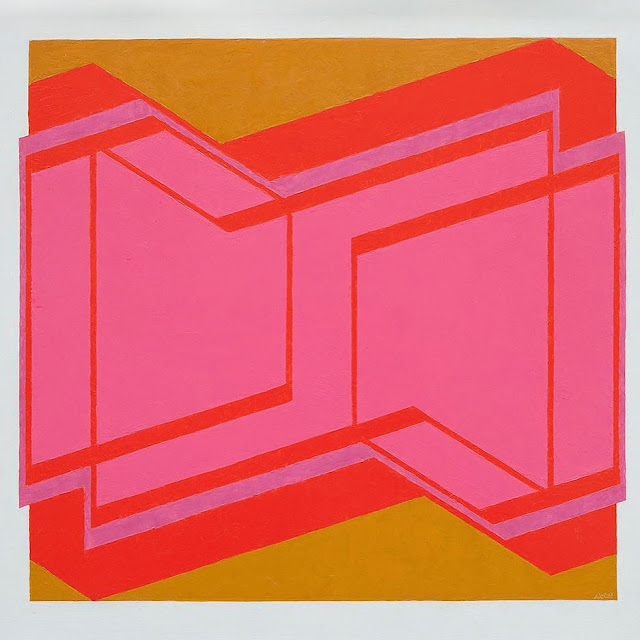 'The concern of the artist is with the discrepancy between physical fact and psychological effect.'

'For me, abstraction is real, probably more real than nature. I'll go further and say that abstraction is nearer my heart. I prefer to see with closed eyes.'

I think these pictures clearly show my connection to Josef Albers. Very clearly the avoidance of the vertical and horizontal and the 90 degree angle. Okay, Albers later returned to the 90 degree angle and the vertical/horizontal in the square. Now the square, i.e. the 1:1 proportion, is also the proportion of wealth and money. He was living in the USA during this time. 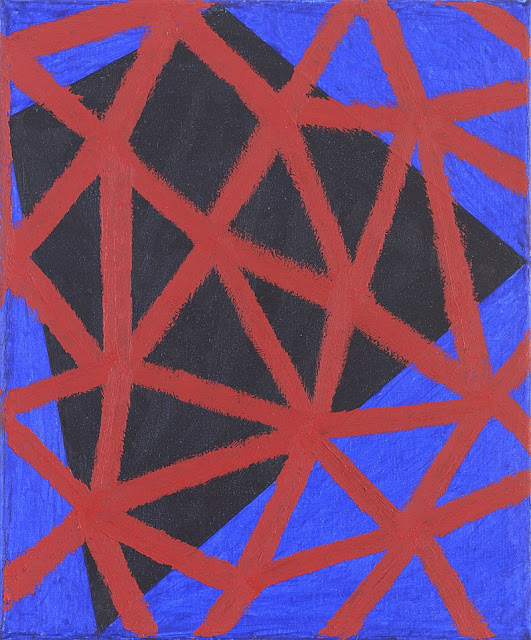 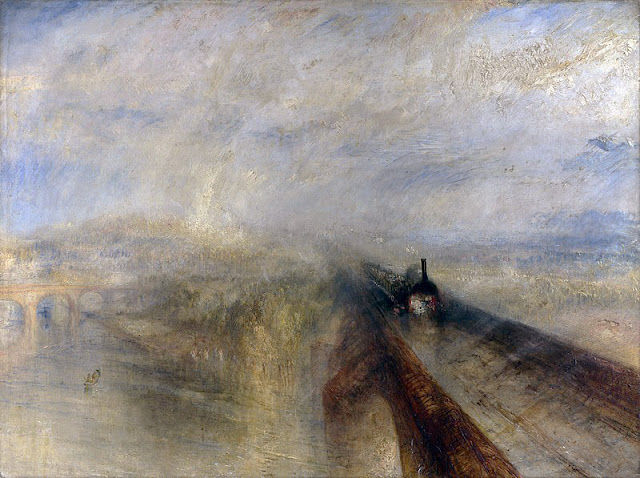 My name is Elfyn Lewis, I’m a Welsh artist living in Cardiff, (capital) Wales. The artist I have chosen is Turner.

I was born and raised in Porthmadog on the north west coast of Wales. The town was built on reclaimed land, as a port for the slate industry, situated some ten miles away in Blaenau Ffestiniog. Ships built in Porthmadog sailed across the oceans delivering slate and other goods, until circumstances changed. It’s now a tourist attraction for most of the year.

The ‘Cob' as it’s called locally is the embankment which protects the town from the sea. My family home is situated on the 'Cob' in a row of tall seaman’s houses overlooking the river Glaslyn in-front and the ‘Eryri’ mountain range behind. Eryri, although small in stature compared to most European ranges, holds its own in beauty and dramatic light. Porthmadog has lost none of its beauty and this is where my love of art began.

This is where Turner painted the estuary long before the 'Cob' was built. On one of his grand tours around Europe he visited this remote area and painted the fast-flowing rivers, the mountains, and the weather – which by all accounts was its usual wet and windy vociferous self, Wales was not kind to him. There are cartoons mocking his tour of Wales with the usual stereotypical nature of the English press.

Growing up in Porthmadog was a wondrous experience, and to this day influences my work. My art teacher at school Rob Piercy ignited my love of painting and encouraged me to look and see the world in new ways. We talked about artists from all over the world, but Turner was always there for me, and I believe he’s one of the first abstract painters. The way he captured light and movement in paint is something that many of us could only dream of doing. You don’t have to like your heroes or claim to understand them, but you can admire and try to understand what they are doing. I’d find myself sitting by the harbour with a sketchbook trying to capture a scene of fast-moving water with the moon as the only light. His influence ran deep just like the river.

Paintings like 'Rain Steam and Speed' capture so much movement - emotive snapshots of a place and time that transport the viewer. Even now, Turner’s paintings still resonate and sing the song of paint and its history. There are many works of his that capture this feeling of being there. In this painting 'Rain, Steam and Speed' the power of sky and land joining as one, with the train appearing like an arrow from the gloom. The techniques Turner used in this painting remind me of another of his paintings called ’Snow Storm; Steam Boat off a Harbour’s Mouth’ where the sea and sky entwine as one to produce the effect of being in the eye of the storm. These two paintings have elements of abstraction, they give an impression of somewhere, of something that until then had not been seen.

Turner seemed to capture something from nothing. He broke up the traditional way of painting and created a movement that captured nature and landscape in a way that we are still investigating. Turner was not my only influence. I could have talked about Monet and Rothko etc, but Turner captivated me through his use of paint and his burning desire to capture the sun.

My own work is mainly abstract. I use tools and equipment to create paintings that seek to communicate movement of light and water, or the shapes that these elements have left on the land. There are many living artists who have inspired me and the obvious one is Richter. Like him, I use a squeegee to drag and pull paint across a surface. Unlike him I use acrylic paint. Oils, although I love them effected my eyes, so from an early age I’ve used acrylics and especially Lascaux paints. My process is physical and dynamic. I work on several pieces at the same time and skip from one painting to the next. Some pieces take days, others, months. I live with them and watch them emerging - gambling and guessing what to do next. Finding the solution to the work is a constant battle. In my mind I am always looking for a horizon and a feeling of water and sky. Abstract landscapes perhaps.

The painting I’ve chosen of my own work is called ‘Goleuni,’ which means light in Welsh. This painting captures something which for me is all important - the feeling of being whole. It’s full of little mistakes and things you could change or repeat. Mistakes often transform the work from looking like all the others, to being unique. When this happens, I experience a sudden rush of euphoria and delight in something that I hadn’t seen before. ‘Goleuni’ has the horizontal line that reminds me of the ‘Cob’ – with sky above and water below, fast moving clouds capture reflect starlight.

Being a studio-based painter is a daily routine – a balancing act of method and chance – searching for the light. Turner influenced my journey as a painter, but it’s the people and the place that made me. 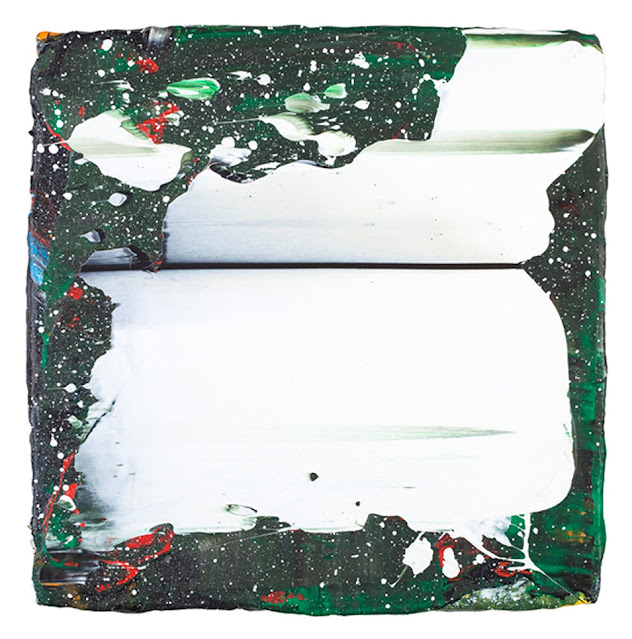 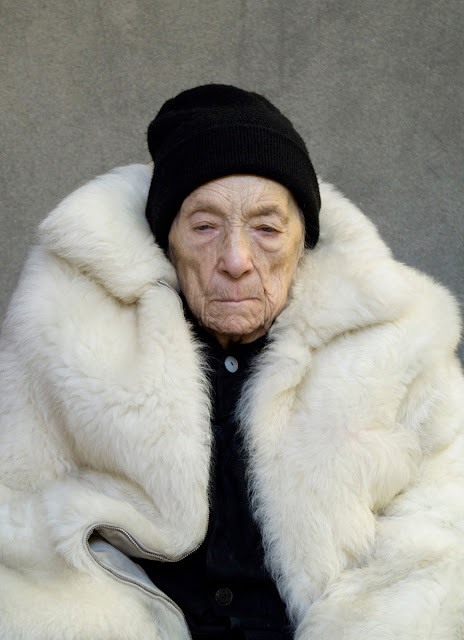 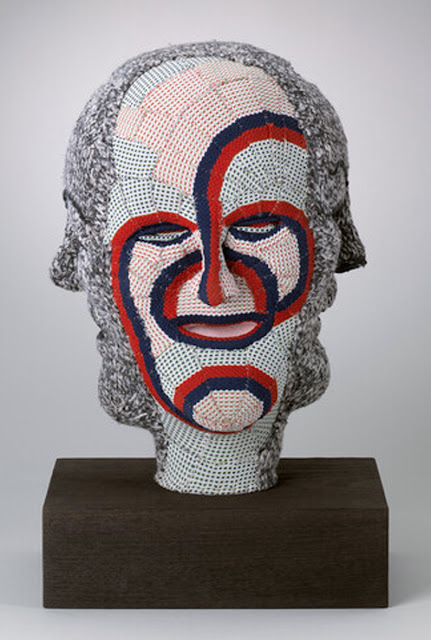 I first saw an exhibition of Louise Bourgeois' work at het Kunstmuseum in the Hague, during "Louise Bourgeois Double Sexus".
In dim light and embedded in Berlage's wonderful architecture I entered into a nightly dream. The extraordinary personal, powerful, vulnerable and sensitive work made an intense impression on me. Louise Bourgeois' art inspires me to follow my own path. 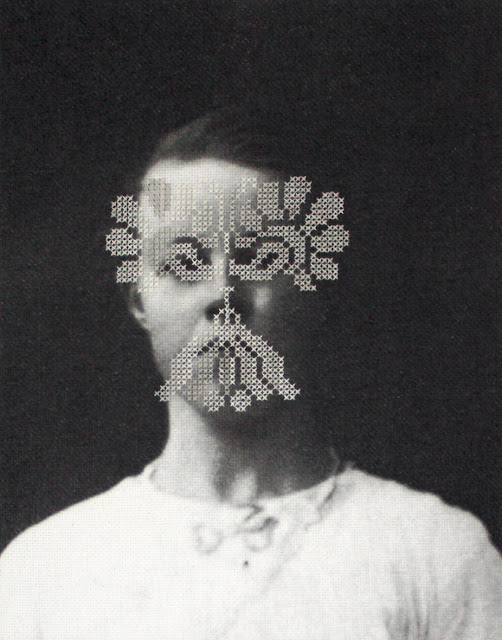 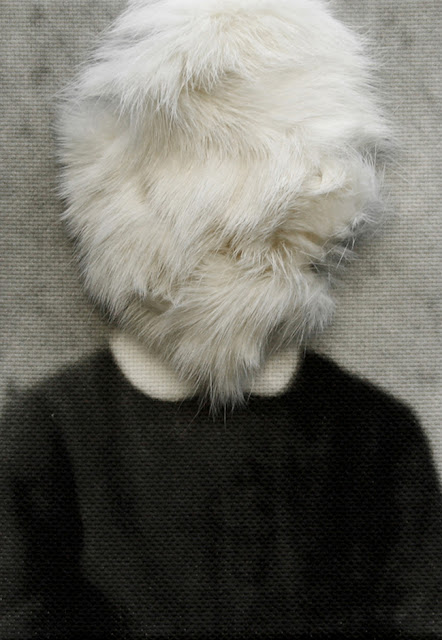 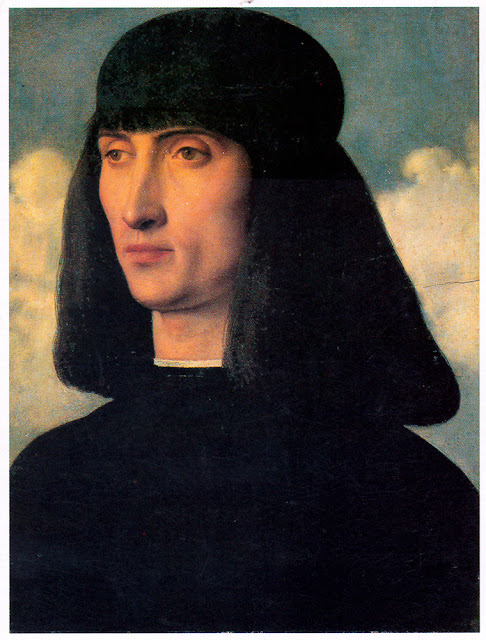 It’s been quite a while since my last visit to the Louvre Museum in Paris, but one visit stays with me; the first time I saw Bellini’s etherial Portrait of a Man. Although small in scale, the work leaves a strong, even monumental presence, in my mind.

The man’s eyes gaze off into space, away from the viewer, thus giving the portrait a sense of turning inward and a spiritual and mysterious aura.

The composition, while very literally a portrait, feels abstract. The dark silhouette that makes up the hair, hat and chest, are the stacking of groups of cut out flat organic shapes, enclosing the lighter colored and more detailed rendered face. There is also a wonderful interaction between the portrayed man in the foreground and the playful movement of clouds in the background. Despite this tight, almost claustrophobic composition, Bellini creates enormous depth and space through very minimal means.

This movement of larger flatter forms interacting with smaller ones and the use of minimal elements to suggest space and depth, are qualities I explore in my own painting.

Over 500 hundred years later, there are concepts and techniques that are still relevant today. While I don’t work with literal, figurative forms I feel that I have a spiritual connection to this work. The bridge between the 15th Century and today inspires me and my 21st Century paintings. 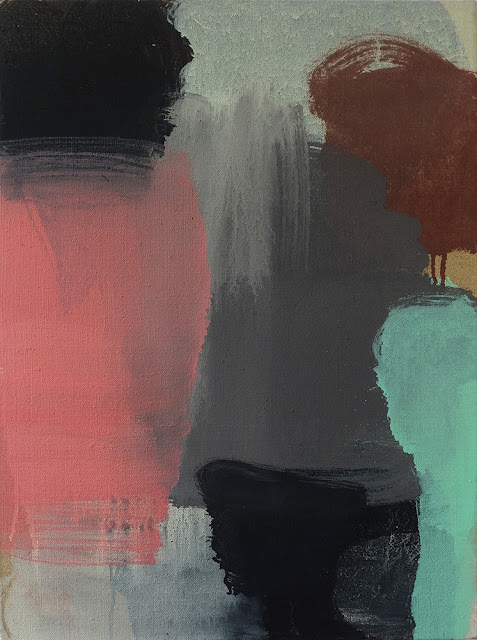 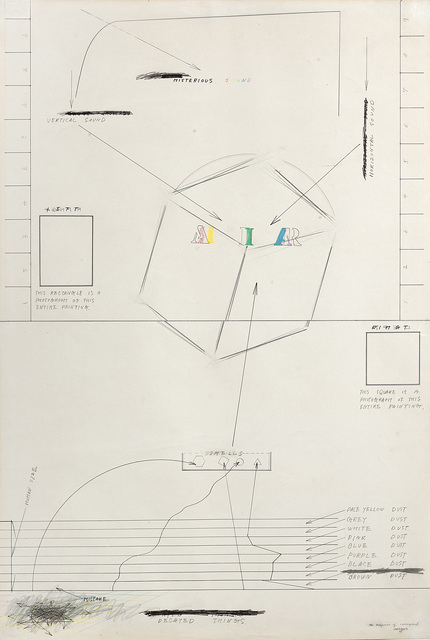 The Enigmas of Correspond 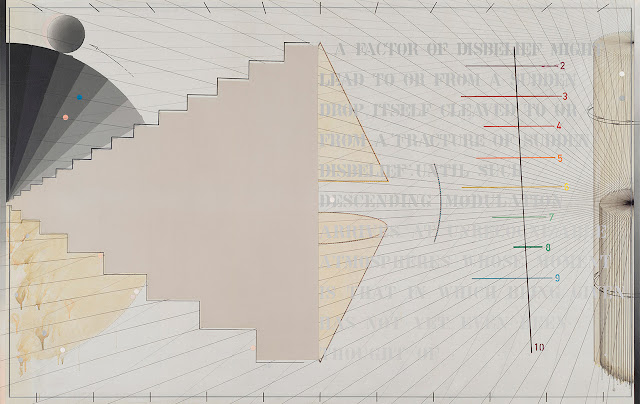 acrylic, graphite, and marker on canvas 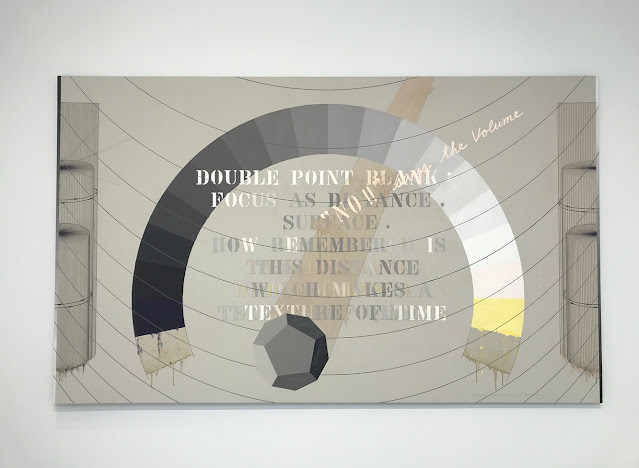 NO! Says the Volume

Through associations and observations, Shusaku Arakawa creates paintings that present as schematic, mathematical examinations. He captures fiction in factual design. His work challenges our desire to accept what we see as ‘truth’ and pushes us to doubt. I try to bring out this tension between fact and fiction in my work as well.

Arakawa’s work presents as a puzzle in which answers lie. The desire to explore and solve that his work brings to the fore (and the impossibility to find the promised answers, which creates space for interpretation) is, to me, the essence of his work.

'What I want to paint is the condition that precedes the moment in which the imagination goes to work and produces mental representations.' —Arakawa 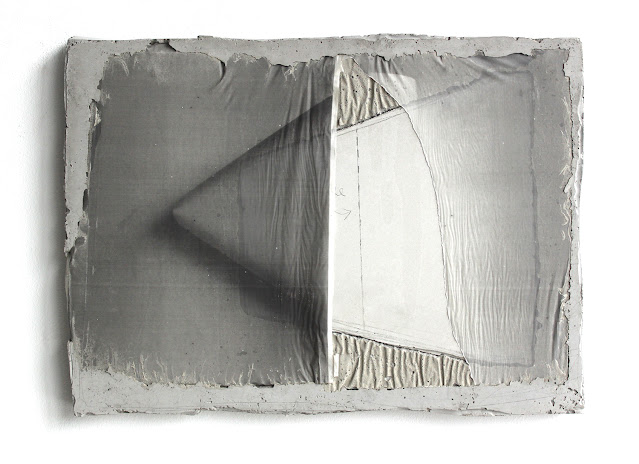 photography and pencil on concrete 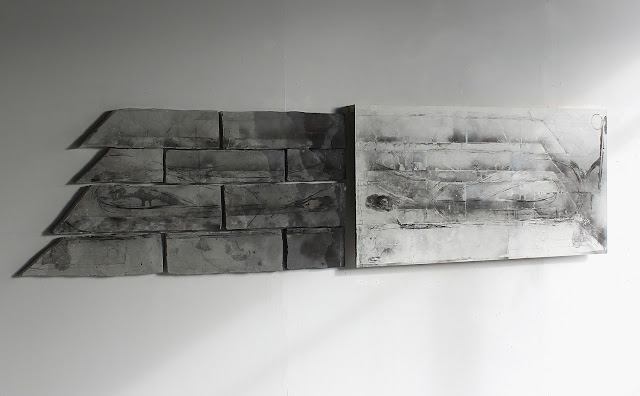 pencil, pastel and charcoal drawing on wood and concrete 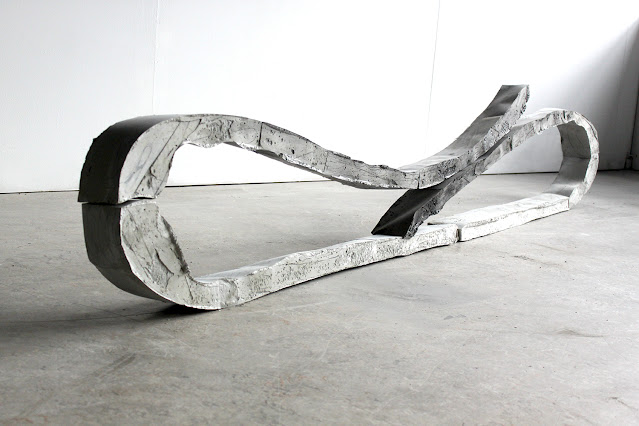 pencil, pastel and charcoal drawing and pigment in concrete 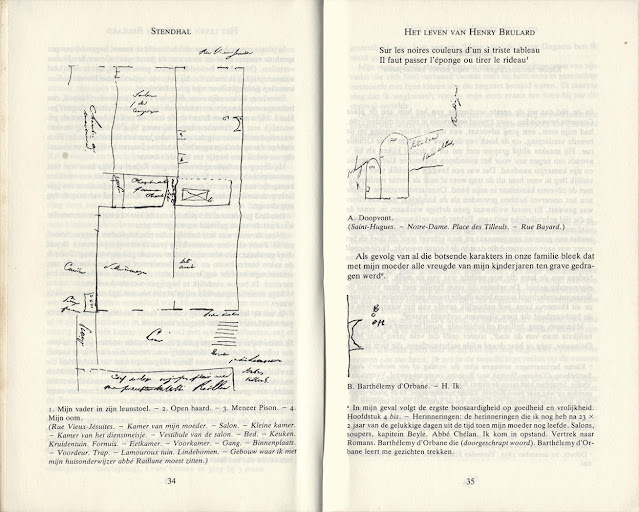 The French writer Henri Beyle (1783-1842) became known as Stendhal, but used even more pseudonyms during his lifetime, such as Henry Brulard. His book 'The Life of Henry Brulard' (written in 1835-1836, but published much later, in 1890) is a pseudo-autobiography in which Beyle describes his life in great detail. He substantiates his text with maps and all kinds of notes to make the story even more credible. Beyle wrote bare and dry, without using fancy words, because they would only distract from reality. The sole purpose of his writing was to gain self-awareness and understand the meaning of his life. Beyle's realistic writing was not really understood by his contemporaries, except by a few other writers, such as Balzac.

Beyle's goal-oriented, almost businesslike approach, which was necessary to dissect his own life and understand his actions, moves me. If you engage in such a search, you can actually always continue, because everything you discover offers room for further research. I can imagine that Beyle found more and more data while writing and drawing, making the search endless. Fortunately, he regularly collected his discoveries in the form of books – novels or whatever you should call them. Regrettably they were hardly read.

My projects often also arise from quests: usually for the work and life of forgotten people. Making drawings helps me to visualize a piece of history or a story and thus to say something about it. In some projects I look back at my own work and try to discover the logic of what I did: does my graduation work has anything to do with what I am doing now? Can I bring back together the paintings I have made and sold by drawing them all? Perhaps it is a desire to keep seeing the drifting, fragmenting life as a natural whole. But perhaps by drawing about it, I always put a layer over reality and get a little further away from it. 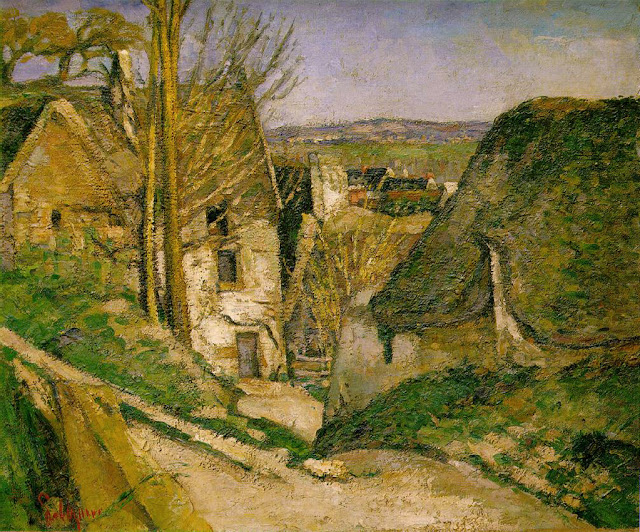 The House of the Hanged Man

One of the things that attract me to the work of Paul Cézanne is the flattening of the pictorial space. 'The House of the Hanged Man' is hard to 'enter' as a viewer, as you bump straight away into walls of paint. "Cézanne organized the picture like stage wings in depth, the horizon high and he indicated the distance through the gradual lightening of the blue. He levels, however, the effect of depth with the sun-lit parts and so largely neutralizes the distance of the various grounds". 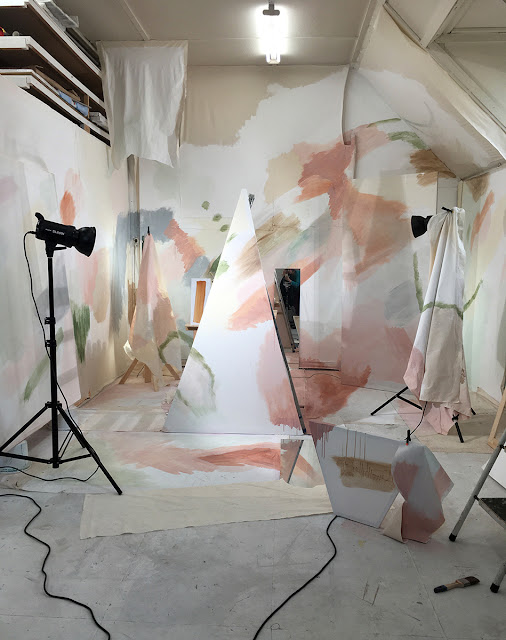