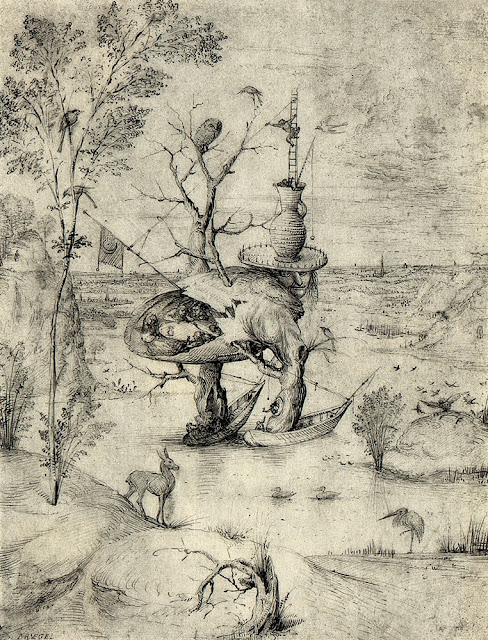 In the centre of the portrait-format sheet, a tree-man rises above a river. His egg-shaped body, covered in part with bark and/or feathers, supports itself on two crooked, partly hollow tree trunks that at the same time resemble arms, and which are standing in boats as if they were shoes. His head, which is turned back over one shoulder towards the viewer, is crowned by a flat disc carrying an enormous jug. They include at least two men and a woman, and one or two other people. A flag with a crescent moon flies from a long slanting pole, recalling an inn sign. Higher up, an owl perches in the leafless crown of the tree that rises skywards from the giant's left foot. The plants motifs in the drawing can be summed up in terms of 'flourishing/living' versus 'dying'. Near a tall, slender tree in the lower left corner a deer is poised on the sloping bank, opposite a stork standing on one leg on the right. Birds are flying around the middle ground and mobbing an owl on the right. In the background, beneath banks of clouds, a harbour with a large number of boats extends along the irregular shoreline, and several villages or small towns are clustered around church spires.
F. Koreny for Albertina Vienna, inv.no. 7876, 1967 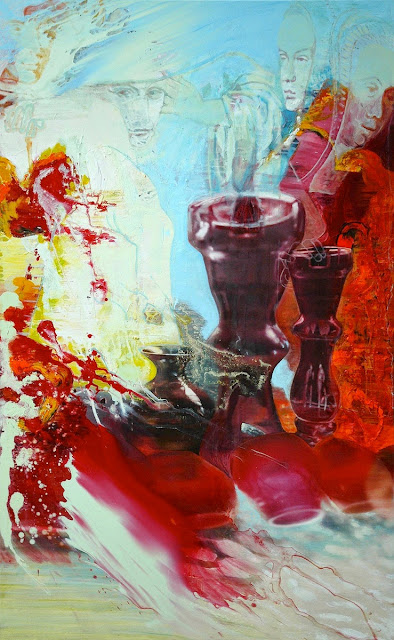 The philosophical tree–man + the 3 graces here and now, in the terrestrial world, connecting the 'higher place' (heaven) and the 'low places' (the underworld). A symbol of the reconciliation from contradistinctions.
Uwe Poth, 2015